Contracted by Marriott Renaissance to help redesign the hotel, Montreal-based design firm, CAMDI wanted to offer a different, more independent type of hotel experience that showcased the creativity of the city’s local artists. The resulting spaces reflect a mixed design aesthetic that combines stylish elegance with dramatic accents, particularly through the use of visually impressive lighting throughout the hotel.

CAMDI partnered with Bloom Lighting Group to create and integrate custom lighting fixtures in the Renaissance’s guest rooms, hallways, and lobby, as well as in their signature East Restaurant. The new luminaires shine in each of their respective locations, reflecting the overarching theme and elevating the intended design scheme.

“We have worked with Bloom in the past, and are continually impressed by their ability to customize any request,” said Karine Touzel, designer at CAMDI. “They are able to create and integrate the lighting with the essence of the project, in addition to being fast, affordable and very easy to work with.”

Within the hotel’s guest rooms, soothing lighting and neutral colours are juxtaposed with accented forms and eye-catching decorative elements. Bloom designed many custom luminaires within these rooms to match this artistic theme, as well as define the different functional spaces.

Guest rooms also include a pair of oversize statement lamps, one a six-and-a-half foot tall standing arc lamp in black steel with black fabric shade, and the other a giant steel standing floor lamp in red matte finish reminiscent of the drafting lamps so often seen in artist’s studios. Both luminaires pair well with the furniture’s mid-century modern aesthetic, drawing the eye and delivering soft lighting to the seating area.

In hallways, white powder-coated LED wall sconces in long, tubular shapes emit gentle lighting that reflects back against glossy wooden panels, illuminating the hallway in calming tones. In elevator lobbies, functional, yet decorative installations provide light through a series of black fabric half-shade sconces, while imitating art installations typical of the area’s many galleries. Floor-to-ceiling black pipes are at once organic and industrial, simulating both the vines of a tree and the tunnels of Montreal’s underground subway system.

Down in the lobby, the same oversize red matte steel drafting lamp overlooks the seating area adjacent to grey couches and a whimsical swing, while its twin in black matte steel finish stands dramatically next to the check-in desk.

Above the bar hangs an 18-foot square grid of black steel tubes interspersed with round antique bulbs, illuminating both the bar below and the gilded Chinese shade pattern of the ceiling. Above the tables, large black wire pendants mirror the same black steel of adjacent decorative wall panels, while also evoking traditional Chinese forms.

Finally, in the center of the Restaurant, the pièce-de-résistance: four massive suspended, hand-cast steel Chinese bells, sourced directly by Bloom from a specialized factory in China after the restaurant’s owner requested the hard-to-find ornamental pieces. Tremendously large, the bells cast subdued lighting over the booths below.

“We weren’t sure that Bloom would be able to find the bells but they did,” said Touzel. “They look very impressive and we are very happy.” 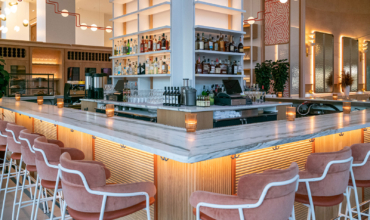 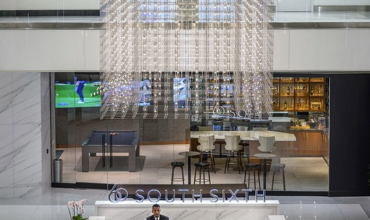 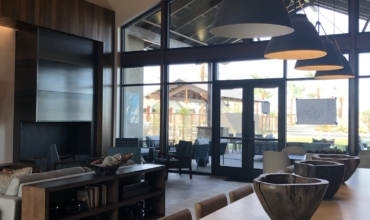